Giovannie and the Hired Guns Concert 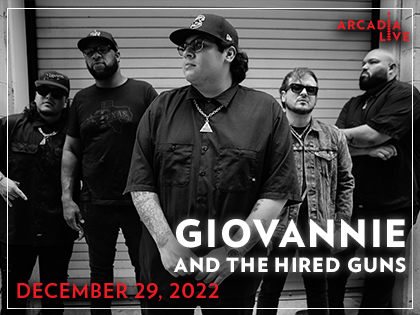 Giovannie and the Hired Guns at Arcadia Live, Kerrville Texas on 12.29.22
Event Description:

Giovannie and The Hired Guns: 9:00pm

One of the most crowd-thrilling bands to burst onto the national scene in recent years, Giovannie and The Hired Guns have pushed the boundaries of rock & roll and country to forge an irresistibly gritty sound all their own.

Originally from the Northern Texas town of Mineral Wells, Yanez first explored his unfiltered approach to songwriting at the age of 17 (“It pretty much started right after the first big heartbreak,” he notes). Around that same time, he began performing at local dive bars while holding down a job at a rock quarry. “I’d go play gigs and be out till about three in the morning, then get up to go to work at seven—it was a struggle for a while, but I knew this was what I wanted to do with my life,” says Yanez. Not long after landing his job at the pawnshop, Yanez crossed paths with Trejo and soon began assembling the Hired Guns lineup, then pushed forward with an equally grueling gig schedule. “When we first started out it was always, ‘Hey guys, can you play a four-hour set with two breaks? Here’s $200,’” Yanez recalls. As word got out about their can’t-miss live performance, the band began selling out shows all across Texas, in addition to sharing stages with the likes of Read Southall Band and Kody West.

“The goal for the live show is always to take people away for that hour and a half,” says Yanez. “Whatever problems they’re dealing with, whatever they’re going through or whatever’s happening in today’s world, we want them to forget all about it for those 90 minutes. If they want to get sad and cry, then I’ll cry with them. If they want to let loose and have fun, I’ll do that too. We just want to feel connected to everyone, because we truly are—we’re exactly the same as every single person out there in the crowd.” 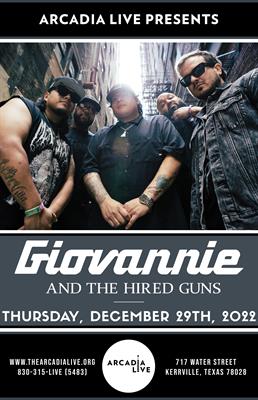